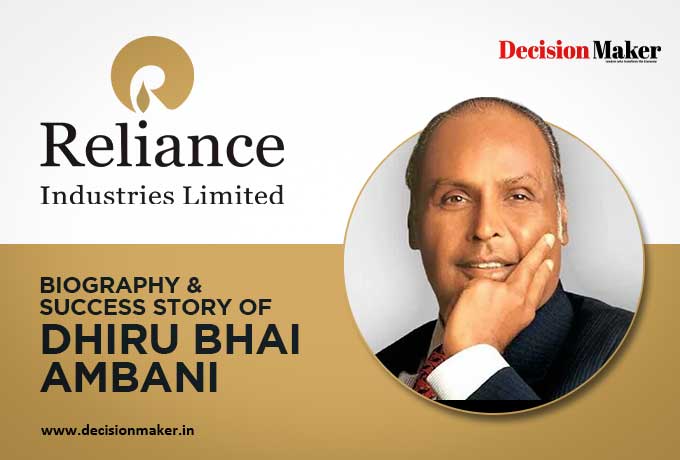 Dhiraj Lal Hirachand Ambani popularly known as Dhiru Bhai Ambani or DHIRUBHAI. The name which is very familiar to every Indian as well as whole world. The inspiration of millions. He has not only reached the success but also helps others to touch the zenith of the success. The founder and developer of India’s largest private industrialization ie., Reliance Industries, he didn’t start big neither he has any big platform. His life was like a common man like us. But the end was superb he touched whatever he got everything in his favor or made it in his favor. The lines is very true about him- ‘ IF YOU ARE BORN POOR, IT IS NOT YOUR FAULT, BUT IF YOU DIE POOR, IT IS YOUR FAULT’.

These were some of the words he stood by and proved it perfectly in his life. His deeds were determined to change failures into success.

The work and tendency towards work is inspiration to million those who want to achieve big in his life. The story of his life is a proof that no matter where you start if you have what it takes to make it big, no one can stop you from your goal if you are fully determined. He was a rare kind of genius, who started off by selling Bhajias in fairs and made it all the way to the list of world’s wealthiest people. He dared to dream and worked to make it true.

During the era of 1950s, while he was working in Yemen, he managed to make a few lakhs by melting the Rial currency coins into pure silver and selling it off to the bullion traders in England (London). After 10 years he returned to India in nearly 1958 with Rs. 500 in his pocket. He took shelter in a single room chawl in Mumbai, along with his family and here he traded different kinds of products ranging from spices and fabrics for nearly 8 years.

Dhirubhai Ambani, in the 1960s, founded Reliance corporation in partnership with his cousin Champaklal Damani, the office was set up in a 350 sq. ft room at Masjid Bunder. Initially, the company traded in the export and import of spices and fabrics, but later in 1965, the partnership between the two cousins broken, as both of these men had different takes towards the conducts of their business. From here, Dhirubhai continued his own lonely. He sensed a great opportunity of business profits in the textiles spinning mill named ‘VIMAL’ at Naroda Ahmedabad. This was in the year 1966. The same year, Reliance Corporation was incorporated in Maharashtra with the name RELIANCE TEXTILES INDUTRIES PVT LTD.

In the year 1977, Reliance Textiles had an annual turnover of Rs. 70 crore and that is the year when the company went public. It held its initial public offering in 1977, and this issue was supposedly huge subscribed by 7 times. Most of the equity capital holders were from small towns.

At that time very few no. of people were participating in the Indian Capital markets. But, Dhirubhai managed to raise 2.8 million equity shares by selling his shares at Rs. 10 each or 12, to people from small towns. This was undoubtedly a courageous move. Only his promise of a substantial return convince 58k middle class men to invest in his then unknown firm.

This results in another record being made when more than 35k shareholders attended the company’s annual shareholder’s meeting and the no. was so huge that the meeting took place in a stadium, as no hall of Mumbai has so many seating capacities.

From then he started promoting his brand ‘Vimal’ even more significantly and properly. Franchise retail outlets were started, and as many as 100 franchise stores were made and started in a single day. A report says this unit of textile production was certified as ‘excellent’ by the developed countries.

In the year 1979, a company named Sidhpur Mills was merged with Reliance. The company went on expanding its polyster yarn. In the year 1985, Reliance textiles was renamed as Reliance industries ltd. By the year 1992, the company was producing around 145,000 tonnes per annum of polyester yarn, at its developed unit, making yet another world record.

In the year of 1992, the Hazira petrochemical plant was set up, and since that time, the company assertively turned towards oil refining, telecommunication and petrochemicals as well. The company started off with an investment of 50,000 had turned into a company worth Rs. 75,000 crores and reliance became 1st company to register its way to the list of fortune 500 companies. He took the business from bottom to zenith levels to being the largest private sector firm of India. Dhirubhai has a great skill of convincing people and his consummate skills were also great. He could win friends and influence them, and this worked in his favour a lot. He was able to convince government of the benefits of convertible debentures and issued up to 6 series of debentures. This helped in raising huge sums of money.

THE DEMISE OF DHIRUBHAI-

Dhirubhai suffered his first stroke in February 1986 that left some part of his right body paralysed. After this incident, Dhirubhai handed over the control of Reliance to his sons. Later, in the year 2002 on 24th June, he was admitted to the Breach Candy Hospital after he suffered his second stroke. He was in coma for 6th July and finally left his body. This kind of people never dies because their stories and teaching always kept them alive always.

So, this is the success story of Dhirubhai the man who had and nothing and the man who has everything. Before his demise reliance was made it place in list of forbes as the 138th richest person of the world with an worth of 2.91 billion US dollar. 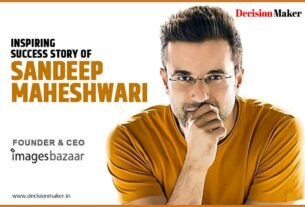 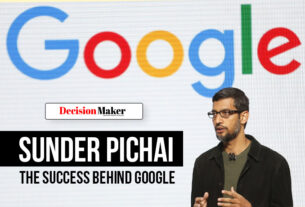 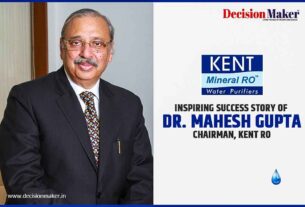